I’ve written already about my love of Crazy Ex-Girlfriend. Now that we’re in between seasons, I need to both occupy my time and get my fix, so I’ve made a list of my Top 10 moments of the show so far. In truth, making a “Top 10 Favorite Songs from Crazy Ex-Girlfriend” would have been a tall order, so this was damn near impossible. The writing/music/choreography/etc. on this show is just so sharp. I’m sure next month I’d be able to update this with an entirely new set of scenes/images/lines.

10. Paula and the ice cube tray. Girl, we’ve all been there.

9. Darryl: I like women – I like sleeping with women! I like the way they smell, I like the way that they – the feel of their skin, I like their… bird-like voices. I mean, does that sound gay?
White Josh: Nope. Sounds like a serial killer, but a straight one for sure.

I’m guaranteed to like pretty much any scene White Josh appears in. He’s the voice of reason of this show.

So I’m not the biggest Jebecca (Joshbecca?) fan, but I really dig these groovy outfits.

We’ve reached the hashtag portion of this list. This comes from “I’m a Good Person,” and I repeat it in conversation often. Honestly, why isn’t this used all the time?

Look, I always love Rebecca and Paula, but one of the great joys this season was seeing Rebecca explore other friendships with some unlikely allies. Heather has been one of my favorite characters since Season 1. She started out as Rebecca’s unenthused neighbor; it took a while for her to find her place in the show’s universe, but she–like White Josh–is one of the show’s best secondary characters. I can’t wait to see where this girl group goes in Season 3.

5. “You’re pretty, and you’re smart, and you’re ignoring me, so you’re obviously my type.” This is the line I knew I’d be rooting for Greg. 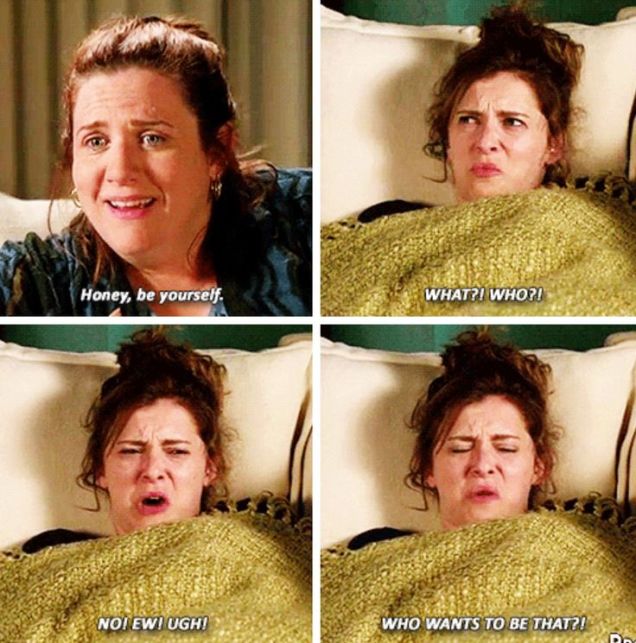 2. The lyrics “For some reason you’re now on the top of my to-do list/let’s get this over with/so I can focus on other tasks.”

I know exactly what it says about me that this is the sexiest thing I have ever heard. Also, Scott Michael Foster is scrumptious in every frame of this video. The entire Santa Ana wind episode should be a national treasure.

If you’ve even been a high-achieving woman, I think you know how this feels.

About Breakfast at Kait’s

A twenty-something book editor in New York who reads with her breakfast and remains perpetually on the hunt for the best cappuccino and croissant in every city she visits.