I can’t remember exactly why I decided to throw the first Breakfast at Tiffany’s party. It was August, and I was about to start my sophomore year of college, and it had seemed like a waste to let Truman Capote’s birthday party go by without a party. I handwrote invitations, asked people to dress up, and prepped my dorm room for a cocktail party. Because back in college, a cocktail party was exotic. Twenty-five people crammed into my tiny dorm room. My room was in the basement. Exposed pipes ran along the ceiling. We didn’t care. Most of my friends adhered to the theme; the guys from my freshman dorm showed up in flannel. I hosted the party as Holly Golightly. We had an amazing time.

I was abroad junior year, so I waited until senior year to throw the party again. This time, I held it in the living room of French House. More people showed up. Everyone dressed according to the theme.

In preparation for the party, I finally had the paintings I’d had laying around the apartment for months hung. I scattered my Capote memorabilia– first editions, a Breakfast at Tiffany’s poster, Tiffany & Co. catalogs– throughout the apartment. I spent a couple evenings baking what I called “breakfast-inspired desserts” aka maple bacon biscuits, cornflake-chocolate chip-marshmallow cookies, and lemon cornmeal muffins (my doorman refers to them as “cupcakes”).

As usual, I dressed up as Holly Golightly. Cat was a Christmas present from my parents; he came with the poster at left. I’m particularly pleased that he comes from FAO Schwartz. He’s a real New Yorker, having been forced from his home due to sky-high rents. 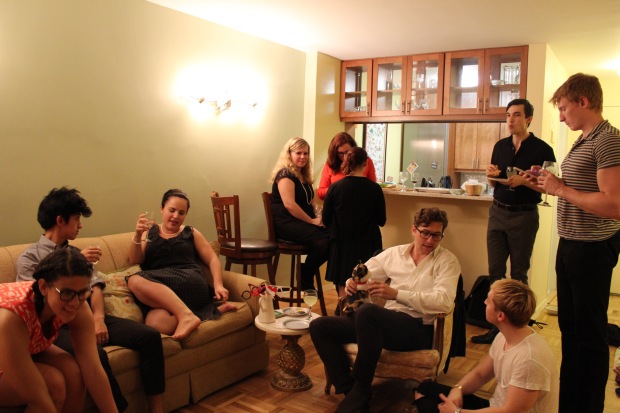 Friends from all different parts of my life showed up to fête the occasion. At least three friends had gone to the parties in college, but most hadn’t. I had friends from kindergarten, friends from high school, friends from college, friends from work, friends made living in New  York. It was sort of surreal to see them all together.

My friend Nico was there for the first incarnation of my Truman Capote obsession, back when we were carpooling to choir together and I used to read Capote short stories out loud for the entire duration of our half-hour commute. Thank you, Nico, for still being my friend. I promise not to make you listen to “A Mink of One’s Own” ever again.

My friends’ dog Bradley was the star of the evening. He was also terrified of Cat. He didn’t quite understand the concept of a stuffed animal, and the plastic eyes freaked him out. He eventually came around.

Bradley and Cat face off. 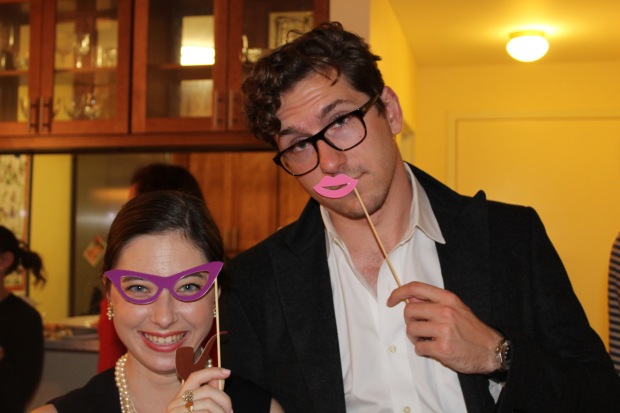 Flying Tiger, a Danish chain with a store near my apartment, had a package of 16 of these party props– glasses, mustaches, accessories, etc.– for $4. I’m pretty sure it is the best $4 I have ever spent. They will continue to make appearances at various functions at my apartment.

We couldn’t let the night pass without an attempt at recreating that famous photo. Four people art directed this shot, probably because I don’t know how to hold a cigarette– even one that is actually a novelty party straw.

All in all, it was a fabulous night– the perfect way to ring in the first September 30 in my (somewhat) new apartment.

For me, Breakfast at Tiffany’s the book has always been about belonging. About finding a place in the world, about finding your people, about belonging somewhere, even if you don’t quite recognize it at the time. So it was really amazing for me to have a tribe of friends to come celebrate. Not all of them are die-hard Capote fans, not all of them have read the book or even seen the movie, but I am so grateful they humor me every year.

About Breakfast at Kait’s

A twenty-something book editor in New York who reads with her breakfast and remains perpetually on the hunt for the best cappuccino and croissant in every city she visits.